Section Meeting 14th November 2022- Vote of “No Confidence” in the VMCC Fiduciary Board.

There was a lengthy discussion on the performance of the current chairman of the fiduciary board, Mario Costa Sa and his fellow directors during which the following subjects were raised.

Due to the loss of £441,567 over the last 33 months the Wessex Veteran and Vintage Section has no confidence in the board chairman Mario Costa Sa and his fellow directors.

The vote of No Confidence was passed unanimously at the meeting and on behalf of our Section members, Section Officers and Committee our Chairman will be formally writing to the board to register this vote and the Section’s wish for the current board to stand down at the earliest opportunity for the good of the VMCC. 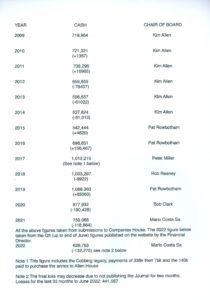