We are delighted to advise that the Section has been granted a long term loan of the Ken Blake Photographic Archive.  Ken’s widow, Mrs Shirley Blake has kindly loaned Ken’s extensive photographic collection to the Section to use for slideshows and presentations. As many members will know Ken took his camera with him everywhere he went on runs and events spanning the period from the late 1950’s until shortly before his untimely passing.  It’s an invaluable archive of photos showing the evolution of the Veteran and Vintage Motorcycle movement and a fascinating archive depicting machines rarely seen at events in the current age.

Ken’s film and slide shows were always well attended and we are honoured that Shirley has loaned them to the Section.

We are currently in the process of digitising them to make them more accessible and to benefit from the use of the Section’s recently purchased digital projector. 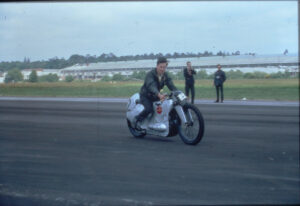 Ken Blake on the Monty Saunders 1933 Excelsior 250cc Brooklands Record Holder @ 102.48 mph  on August 26, 1933 a record that still stands to this day. Ken saved this historic machine from the clutches of the scrap man after Monty Saunders’s passing. Ken then partly restored and partly preserved the bike back to running condition and here he is parading it at the first reopening of Brooklands in 1967.